Cruttwell's two geological notebooks contain addresses delivered by him to the Cardiff Natural History Society and other groups, notes on mineral types and their distribution, particularly in Western Britain, as well as maps and section drawings, notes and clippings.

Eve's papers are overwhelmingly concerned with his work as a teacher. The greater percentage are lecture notes, with some research materials, professional and personal correspondence, and photographs. His lecture notes fall into two categories: university lectures and popular courses and addresses. The university lectures are represented by thirty bundles of notes on radioactivity, physics of solids, relativity, and astrophysics dating from ca. 1909 - ca. 1930. The popular lectures date largely from the 1920s and 1930s. They deal with radioactivity, engineering physics, military applications, astronomy, historical topics, and the relation of science and religion, and were delivered before a wide range of groups, from the McGill Physical Society to schoolchildren. Apart from reprints, Eve's research materials consist of a notebook on solid geometry from his university days (1881), three laboratory notebooks (1909-1915), correspondence and a notebook concerning research in the U.S. Department of Mines (1927), his diary of a visit to the United States in 1929 undertaken to survey geophysical prospecting methods, and some files of correspondence, graphs, reports, notes,and photographs on ultra-violet light, eclipses, radio research, seismic activity and quantum theory (1922-1934). Closely related to these are a few files of professional correspondence (1915-1932) regarding seismic shocks, particularly in relation to the Mount Royal tunnel, the eclipse of 1932, Niels Bohr's work (including a letter to Eve from Bohr) and the scientific publications of Eve and others. Files of correspondence, reports and programmes document Eve's activities in various organizations, such as the Silberstein Institute of Physics (1921), the Air Research Committee (1920-1922), the Canadian Engineering Standards Association (1920-1927) and the Pacific Science Congress (1930-1935). Other papers concern his work in elementary education both in public and in private schools; they contain newspaper clippings about Eve's publications and career, and correspondence and notes relating to his retirement (1935) and photographs.

Consists of a notebook Robson kept as a student at the Banting Research Institute at the University of Toronto from June to September, 1930. The notebook comprises over 60 manuscript pages, plus 31 manuscript pages attached to the end, 1 loose leaf of manuscript medical notes, approximately 50 ink drawings of various sizes of experiments, 26 black and white photographs pasted in, including a photograph of Sir Frederick Grant Banting in his office, the Banting Research Institute and its faculty, and experiment apparatuses. Also includes 13 mimeographed pages (pasted in) containing 12 different experiments, the printed programme for the formal opening of the Banting Institute on 16 September 1930, and 9 newspaper clippings pasted in related to the opening of the Institute.

The fonds includes Dr. Archibald’s correspondence and reports pertaining to the Ministry of National Defence, 1940-1945; certificates and diplomas; and a photograph. The correspondents include family members, Dr. John McCrae and Sir William Osler. There is also a draft of a book on wound ballistics and gas gangrene; an Army Field Service book, 1916 and two notebooks on internal and external pathology, “matiere medicale et therapeutique,” and “medecine legale et toxicologie,” 1895.

Scrimger's papers mainly concern his war service. His brief diary of the Ypres campaign, 1915, is supplemented by signals and military messages on troop movements and medical matters; Scrimger sometimes used the signal forms for additional diary entries. There are also a handful of letters and cables of congratulation on his V.C., certificates of service, newsclippings, and printed souvenirs. The remainder of these papers consist of obituary notices and tributes. Some are pasted into Scrimger's notebook of Professor Bier's clinic, Berlin, 1910.

Adams' papers are largely concerned with his experiments on the mechanical deformation of rocks. Glass lantern slides, both for lectures and private record, are also included, as well as some materials on his interest in religion and in the history of geology. His scientific research is documented by working papers and experimental materials on rock deformation, 1896-1912. These consist of ten notebooks and one scrapbook recording his experiments, as well as notes, photographs, and carbons of typescript chapters on background literature, equipment used, and specific minerals. There are also graphs recording results, and over 1,000 photographs, glass negatives, and petrographic microscope slides. Adams' index-card bibliography lists articles and reports on Canadian geology and mining (ca 1900-1920). Adams' collection of glass slides and negatives were used for teaching geology and as a private record of his travels and family life. These slides number approximately 1,000, and show mines (particularly in Canada) volcanoes and glaciers, a large collection of views of Mexico, the Laurentians, China, the Rockies, England and Palestine, as well as family and vacation scenes. Also included are two essays, and an outline for a third on the Christian life (1937), short reflexions on his activities from 1937 to 1942, a photocopy of his will (1943), clippings of articles where he is mentioned (1919-1942), and notices of his history of Christ Church Cathedral (1941). Adams' interest in the history of geology is reflected in a manuscript biography of A.R.C. Selwyn, for the centenary of the Geological Society of Edinburgh, and a handful of letters and notes on the early use of the word "geology" (1932). His post-retirement travels resulted in a manuscript essay on mining in Malaya.

The fonds is composed of G.E. Wilson's student work, primarily between 1930 and 1935, including design projects and notebooks from the History of Architecture course (1931-1933), and drawings generated from his travels on the McLennan Travelling Scholarship. Mr Wilson's professional work concentrates on his residential projects in Quebec while in partnership with G. E. Auld. The publications vary from his four books based on his experiences in the Royal Canadian Air Force during WWII to home planning books, office brochures and reports. 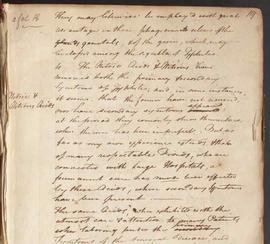