Fonds shows the relationship between Thomas R. Boggs and William Henry Welch, one of the founders in the establishment of the Johns Hopkins Medical School in Baltimore. The fonds contains letters from Welch to Boggs, from 1910 to 1927 concerning A Century of Charades, a book of riddles by William Bellamy.

The fonds consists of Dr. Bensley's research notes and correspondence, particularly in relation to his publication McGill Medical Luminaries.

The fonds contains original and typescript letters, manuscript notes, newspaper clippings, journal extracts, reminiscences and more, assembled by Harvey Cushing between 1920 and 1924 during the course of his research for the biography of William Osler. For the biography, Cushing collected and retyped over 7500 pieces of Osler's correspondence, among which are some original letters.

The fonds contains letters, 1948-1958, to and from Dr. W.W. Francis. It also includes two poems by Francis, and a letter from the Dean of the Faculty of Medicine regarding death of Francis in 1959. 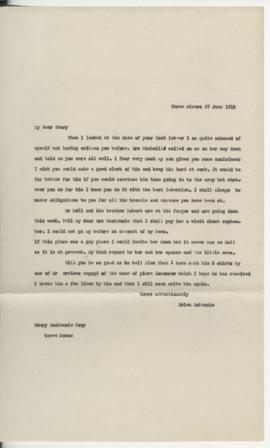 File contains a letter from Helen McKenzie to Henry McKenzie. In it, she hopes that McKenzie will make a good clerk of her son.

Frobisher's papers comprise a letterbook of the North-West Co. containing copies of letters written by Frobisher from April 1787 to October 1788, two original letters to Simon McTavish, 1796, and one from him, 1787, business and legal documents, largely concerning the estate of James McGill, 1810-1834, and a diary, 1806-1810, mostly a record of where he dined.